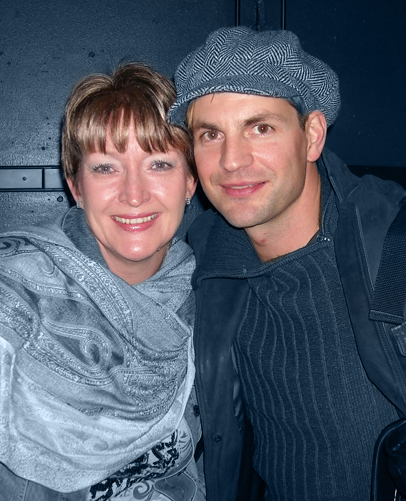 
Last weekend, I journeyed once again to Bilbao, Spain to attend the Gale Harold Fan Meet. This was my third Zarata Event in Bilbao and each time it gets better. In addition to meeting up with several friends from my previous conventions, I met and became friends with another bunch of great gals and Gale fans. The Fan Meet was just two days but they were jam packed and Gale was kept busy with a Meet and Greet, two Coffees, two 15 minute brunches, two autograph sessions, two photo sessions, two panels, a special panel with games, a wine tasting, an auction, a cocktail party, a VIP lunch and a Close Up. I only attended one of the coffees but participated in all the other events except the two brunches, one of which was at 5:15 p.m. Brunch??

Gale was in his usual disguise of beard, glasses and ever present cap but he looked good and seemed to be enjoying the events. Once he got warmed up, he good naturedly participated in everything that was arranged for him. It was all Gale all the time.

I did not take many notes so most of what I relate is from a somewhat faulty memory. No videos were made and pictures were only allowed during the panels.

The Meet & Greet and the Coffees were in a small room with about 20 sitting at tables arranged in a big square where we could ask questions and chat informally. Many questions have been asked and answered in several of the other Cons but there are always new fans attending so there is a lot of repetition. Gale often does his little side step and diversion dance with some of the questions and if I recall one of the games on the special panel was to turn the question around on the questioner. If you get Gale going on a subject that truly interests him, he will expound for some time. Of course there is the language barrier and many questions have to be translated for him and bless his heart he sometimes tries to respond using some Spanish and/or Italian phrases. One gal brought the house down when she tried to tell him that her friends wanted her to “rape” him but then tried to explain that the word she was trying to say meant “kidnap” in her language. Gale was appropriately amused and we all teased her afterward.

Some of what I gleaned from the panels and chats:

He likes Peaky Blinders on Netflix

He is still in Adoptable if Scott still wants him. Duh!

He likes Bilbao, Italy and Romania and would love to go to St. Petersburg.

He was asked to describe each of the QAF characters in one word:

He really liked the series Treme which he just watched recently. He loved the music. He thought that the second season of True Detective was inferior to season one. I chuckled when I remembered that his ex-girlfriend Yara Martinez had a small role in the second TD as a scarred bar owner.

The Special Panel included games. Three fans came up and drew on an easel and Gale had to guess the name of the movie each drew. He got them all really quick. E.T., Psycho and Snow White and the Seven Dwarfs. They also tried a game in which he was to say two truths and one lie and we had to guess the lie but he wasn’t very good at it as he doesn’t like to give too much of himself away. The first one was 1. I like this game. 2. I really like this game and 3. I don’t like this game. Another was something to do with spinal surgery which didn’t make any sense and all 3 statements were lies. One that was okay was that 1. He hurt his toe. 2. He treated it himself and 3. It still hurts. The lie was that he treated it himself. Then he had a bag and people went up and felt in the bag and tried to identify the object without looking. The objects were all items that they were selling like keychains, cups, magnets, notebooks, etc. and all were easily identified. At the end, everyone went up and Gale gave us each a coaster with different pictures of him and a pen that said Gale Harold Fanmeet, September 2015.

The wine tasting was in the same room as the coffees and we were told about 3 different wines which we sampled. I think it was one white and two reds but I don’t like dry wines so I don’t remember much about them. I didn’t like any of them.

The cocktail party was the usual wine and various plates of hors d’oeuvres and Gale beginning the evening sitting at the VIP table and then moving on to each table for everyone to have a chance to chat with him. As with all the events, I found Gale to be very entertaining and at ease.

The auction included two insulated cups with the Fan Meet printed on them and signed by Gale, a portrait of Gale which was nice but he looked rather bug-eyed and two tee shirts of Gale’s that he supposedly had worn. I didn’t expect Gale to be in the room when these items were auctioned but he was and I think he was rather embarrassed that each tee went for 800 euros. He kept his head down during the bidding. One featured a group he liked called Hard Lessons and one was from Ardent Studios in Memphis. He told us later that they asked for something of his to auction and he had lots of tees and these two were particular favorites. One cup went for over 100 euros and the second went for 200. I think the portrait went for 200 euros. One gal just bid on it to start the auction going and ended up getting it.

The VIP lunch was the best event and unlike the bedlam of last year in a crowded noisy restaurant there was about 20 of us at tables arranged in a big square with Gale at the head. You entered the room according to how much money you paid for the lunch and could pick your seat. I enjoyed the meal and the chatting and you could hear everything that was said by him and those talking to him. The menu was grilled prawns, Caesar salad, a choice of grilled hake and fried clams with snap peas and beans or grilled veal tenderloin and Iberian cured ham. I chose the hake which was very good and the dessert was chocolate cake all served with white, red or rose wine. The meal wasn’t served immediately so we ran over the time reserved for lunch and none of us were ready to leave but a bus was waiting to take us to the Close Up and we had to beg for 5 minutes to run to our rooms to change or get a jacket and use the facilities before setting off.

The Close Up was a trip to the Bizkaia Bridge which is the eldest transport bridge of the world above the estuary of Bilbao. We walked along the water for awhile and then stopped on the balcony of a hotel for coffee and cookies before we took an elevator to the top to walk across the span. It was rather amusing to see Gale walking amongst the harem of women. The view from the bridge was spectacular and the day was lovely with a warm breeze. There is a gondola that is suspended from the bridge which can carry cars and passengers across. I was hoping to cross back on the gondola but our bus was waiting on the other side.

A rather puzzling thing was the gift that the VIP’s received. It was a knife and spoon with the Gale Harold Fanmeet engraved on them. We all wondered where the fork was and then we laughingly decided that before it was all over everyone would get the matching “fork” or as we said “folk” for Queer as Folk but alas no fork/folk.

I have to hand it to Gale. He came through with amazing grace and humor even though the whole affair rested on his shoulders. I do think he enjoyed himself for the most part but I’m sure it is all very strange to be the center of attention being hustled from one event to another. It must not have been too tough on him though because the Zarata gals are already planning another one next summer for Gale and his fans.

’m not sure I will head back to Bilbao for a fourth time as I am more interested in going to the Back to the Roots Con in Toronto next June but I never say never where Gale Harold is concerned.