We have another picture of Gale posted by Rebecca Adler !

We have a new/old picture of Gale posted by his friend Scott Campbell ! 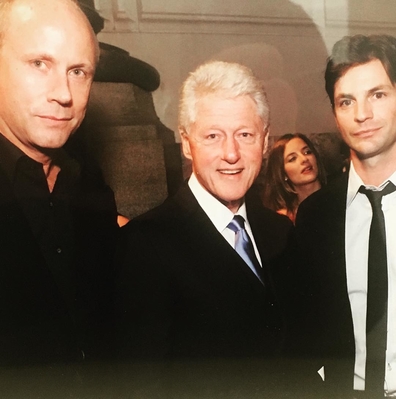 We have a new picture of Gale posted by Rebecca Adler ! Thank you Hela!!

Gale is back!!
We have a new picture posted by Fay Ann Lee on her facebook page

Finally we have a good news!

It really looks like there's a new project for Gale. Canal Street Pictures, Michelle Botticelli and Fay Ann Lee's production company, is looking for a few actors to be cast in a new horror short, written and directed by Fay Ann Lee, where apparently Gale will be starring in the leading role of Erik.

Synopsis: "The female lead; she's beautiful, mysterious and is an accomplished lawyer; she's engaged to Erik, an ad exec, and is anxious to move in with him, not knowing that he's keeping a dark secret from her."

Thank you Hela!!!!!
And thank you Felicity for the translation!

Andron, the Black Labyrinth written and directed by Francesco Cinquemani and produced by Andrea Iervolino and Monika Bacardi will be screened on July 27 in the following cities:


Best wishes to our Gale for his 48th birthday!

We would really like to know where he is and mostly if he's well...
We love following his work as well as his many projects...
We hope he'll show up soon because we really miss him!
We wish that this day brings him luck so that we can see him in some new project!
Best wishes from all the fans from the whole world!

The movie "Field of Lost Shoes" will air across Virginia on PBS stations:


Hello everyone and have a wonderful Sunday!

We have some new photos of Gale on may 6th 2017 and posted by J.Joly, CEO / Founder of @CineCoup, in front of a movie theater where the film "Guardians of Galaxy 2" was screened and the after-film during the same evening! Thank you for sharing them! Thank you Hela!

More news about Kiss me, kill me, the film starring #GaleHarold in the role of Stephen.
Casper Andreas, the director, and David Michael Barrett, the screenwriter, announced on the film's social media that Kiss Me, Kill Me can be found on Amazon, iTunes, Google Play, Vimeo and YouTube, besides being already available on DVD!